Tales of Demons and Gods 289

Battle Through the Heavens Prequel - The Legend of Yao Lao 230

Gal and otaku can't understand each other 50


A foxy temptress. A strange misty tree demon. A girl with the power of the goddess Xianjia! Being caught between these women is a feat in it of itself, but our hero Feng Xi must fight in order to protect the peace and save the world! Original Webcomic http://ac.qq.com/Comic/comicInfo/id/521825 Read more


Fuyuzora Kogarashi has spirit abilities, and has been possessed by ghosts since he was a kid. This has caused a lot of trouble in his life, but now he has learned to fight back against the evil spirits! Unfortunately, he's now also very poor, homeless, and hoping for a happier, more normal, high school life. In his search for housing, he's introduced to a very cheap boarding house called Yuragi-sou, which was formerly a popular hot springs inn. It's so cheap because the house is haunted by the spirit of a high school student whose corpse was found there. Kogarashi doesn't... Read more


The MC is a really poor student that loves playing games. One of his friends is a popular student detective that convinces him into helping with a murder case. After viewing the last moments of an old man being held at gun point, the scene forces the MC into a virtual reality game, dropping him off at a desert landscape with some pyramids. The MC goes with the flow, and the first thing he sees is a BOSS sand monster and a quest option. Like any MC, he expects to defeat the Boss to win, right? No, it turns out... Read more


After acquiring the crème of the crop slave, an unimaginable adventure begins. A birth of a sexy-fantasy series that will rock your world! Original Webcomic: http://www.toptoon.com.tw/comic/ep_list/80189 Read more


After saving the world, the strongest hero who has no place to go anywhere · Leo. Power that is too strong can not enter the peaceful world …… Such a place of employment where he arrived – the former enemy, the Magus army! The 2nd Kakuyomukon. Read more

Yamada-kun to 7-nin no Majo


Ryuu Yamada is a second-year student at Suzaku High. Ryuu is always late for school, naps in class and gets abysmal grades. His life is a dead bore. The beautiful Urara Shiraishi, on the other hand, is Suzaku High's brightest student. One day, without explanation, their bodies are swapped! Ryuu ends up in Urara's body, and Urara in Ryuu's. Read more


Nishizuru Yakki is a permanent part-timer, regular customer in a maid-cafe, and 20-year-old virgin. What makes him special is his ability to see ghosts. But ghosts are not monsters, they are mostly harmless. At least our hero can live by simply ignoring them. Yakki never believed in monsters until the day when he meets the girl named Rokka. This cheerful girl appears to have a secret... Read more

Yoru to Asa no Uta


Asaichi can't play any instruments and his voice is average, and he's only in a band for the girls and the sex. Plus, he's homophobic. For some reason the new bassist is infatuated with him despite the treatment Asaichi gives him. Read more


From MangaHelpers: A certain beautiful princess was captured by a demon king, and a hero went out with his party of adventurers to rescue her. When he returned successfully, he asked for marriage as his reward... but not with the princess, with her maidservant Aria Milford! Aria was as shocked as anyone else, since she quite happily considers herself a minor character in this story! The hero is determined to win her hand and her heart, but what will she do about it? [tethysdust] Read more


Tatsuyuki is the reluctant young master of a Yakuza group. He would rather spend his days playing around than learning the ropes of his family's dubious business. When his caretaker sends him off to a branch office in Fukuoka, the recently heartbroken Tatsuyuki finds himself in a weirder situation than he would have ever expected. Separate extra Side Story: Kurobikari no. Read more


Before she died, Taga Reiji's mother made arrangements to ensure her son would not be alone. What Taga did not know about these "arrangements" was that he would be enrolled into a special class at the school his mother founded where prospective fiance candidates would all vie for his hand in marriage. How will Taga's new life of constantly being surrounded by girls unfold and will he be able to choose just one? Read more

Yamada's Life as a Lazy Youtuber


Three Years ago a Hero sealed a Hell Gate. The Seal has been weakening ever since, sporadically letting Monsters through. After a big Group of Monsters entered the Country through a Hell Gate, the profession of Heroes was needed again. Touka Scott a small Radish Farmer in the southern Town of Cheza is prepared for sudden Monster Attacks. He built himself a hidden Pittrap with Bamboo spikes, to lure unsuspecting Monsters in if they ever try to Attack the Village. Suddenly a Monster attacks. Touka tries to lure it into the Trap with freshly roasted Bacon, but the Monster dislikes this type... Read more


Emma and her friends have a pretty good life at the orphanage they grew up in. Though the rules may be strict, the caretaker is kind. But why are the children forbidden from ever leaving...? Read more


A rookie online novelist who grabs the attention of the online novel site’s CEO. He helps her raise to frame and becoming the most famous online novelist. One thing leads to another, she has signed a marriage agreement… Read more

You Got Me, Sempai!


Serina arrives at school one day to discover her desk has been vandalized—someone's scratched the lyrics to a love song on it...and that someone turns out to be Mizukawa-senpai, a boy who's one year her senior. She wants to get to know him better, but if his frosty demeanor is any indication, she doesn't have a chance! But it seems he might be awkward—not simply mean—and before she knows it, she's asking him out...! With each passing day, her heart races a little faster! Read more


A funny webtoon about a boy with a camera being caught in the magic of love. Read more

Yuze Of The Peach Blossom Springs


A runaway young master accidentally falls into the water and strays into the legendary Peach Blossom Springs. Just like described by the ancient poem, no pressure or disputes would arise in there, and the whole place seems like from a fairytale. Everything is perfect, but a feeling that something is wrong still remains. What is hidden behind the Peach Blossom Springs? Read more


Concerning a silly lich and its silly subordinates who accidentally “transmigrate” into a modern tale. Lord Reichtwein used to be a devastating underworld boss. However, now, he is merely a… pitiful moocher. Read more 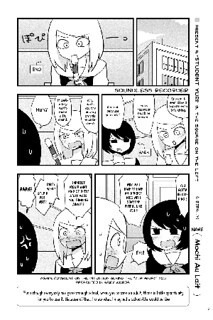 
Every few centuries, 496 demons of the demon world, each choose a human who will fight each other in a tournament of sorts called “Diabloli”. Our main protagonist is a little high school girl who was chosen by the demon she dubbed “Gi-chan”. She was given the power over fire and allowed one wish. She wished to go to school. This is the comedic, action packed adventure filled manga. Read more


A girl that loves to paint left her home and for some reason lives with two polar bears. This is the story of a girl suffering from loneliness and anxiety until she finds the place she belongs. Read more


This oneshot is about a young boy who hates baseball...  until the day a passing stranger teaches him a valuable lesson! Read more


Although Ilene Jung is a popular webtoon artist, she needs another job. A crappy desk job to be exact, one tyrannically controlled by the meanest manager in the world: Jim Kang. He insults her work, refuses to teach her, and even makes her miss an important appointment by forcing her work late on her very first day. To make things worse, when Jim applies to become an artist’s assistant, the artist turns out to be Ilene! In a begrudging twist of fate, she accepts him and the two enter a bizarre working relationship both at home and at the office.... Read more


The following content is intended for mature audiences and may contain sexual themes, gore, violence and/or strong language. Discretion is advised. Read more

Your Majesty, Please Restrain Yourself

Your Majesty, Please Restrain Yourself 1
50,000


A girl snuck into the palace and pretended to be a eunuch to get revenge for her family. Meanwhile, lots of comedic encounters with her King! Read more


The cute and clever “eunuch” was discovered to be pregnant and unexpectedly became the Crown Prince’s personal attendant? The Crown Prince is rumored to be erratic, two-faced and aloof… and yet he keeps indulging her despite her testing his bottom line again and again…Why would she disguise herself as a man after crossing over and insist on staying beside him…”It’s my turn to face all these hardships for you in this world!”Source of collecting images:bato.to/series/78728Resources:https://www.kuaikanmanhua.com/web/topic/5278/ Read more


Born in a time of turmoil, from a rich family, of course the will is higher than heaven, and the misery is that the daughter of a concubine can only suffer disadvantages … never thought, in the struggle with fate but can meet someone who can extremely pamper her! You are not afraid of anything, anyone, I help you against the world! Read more


In a busy and bustling city, history is soundlessly scattered throughout. Those legends that speak of rare treasures, lost in the flowing river of time. At this place, in this time, they are here&#8211;in an antique shop named &#8220;Ya She&#8221;. Read more